The Foreign and Commonwealth Office (FCO) advise against all travel to:

The FCO advise against all but essential travel to:

On 26 January 2020, a spokesperson for President Buhari announced the President had ordered air strikes in Niger state against criminal groups operating out of the Dogon Gona forest area bordering Zamfara and Kaduna states. If you’re planning to travel to Niger state, you should follow the advice of local authorities.

The al Qaeda-linked terrorist group Jamaat al Ansar al Muslimeen fi Bilad al Sudan, better known as Ansaru, claims to have killed at least 6 people, kidnapped dozens, and destroyed several vehicles during an ambush along the Kaduna-Zaira highway in Kaduna State in mid-January. If you decide to travel to Kaduna State, you should avoid regular patterns of travel or movement, and aim to only travel during daylight hours.

There is an ongoing outbreak of lassa fever across a number of states.

Following the death of Iranian General Qasem Soleimani in a US strike in Baghdad on 3 January, the Nigerian Inspector-General of Police has placed his forces across the country on high alert because of an increased risk of public disturbance.  You should avoid large crowds and public demonstrations as they can turn violent unexpectedly and at short notice. If you become aware of any nearby unrest or disturbances, you should leave the area immediately. Be aware of your surroundings, remain vigilant and keep up to date with the latest developments, including via the media.

Since January 2018, the Islamic Movement of Nigeria (IMN) has protested regularly in central Abuja and other cities. These protests, particularly in Abuja, have the potential to turn violent.

Terrorists are very likely to try to carry out attacks in Nigeria. Most attacks occur in the north east, particularly in Borno, Yobe and Adamawa States. There have also been significant attacks in Gombe, Kano, Kaduna, Jos and Bauchi States and in the Federal capital, Abuja. Further attacks are likely. Attacks could be indiscriminate and could affect western interests as well as places visited by tourists. You should avoid places where crowds gather, including political meetings, religious gatherings and places of worship, markets, shopping malls, hotels, bars, restaurants, transport hubs and camps for displaced people.

There’s a high threat of kidnap throughout Nigeria. Kidnaps can be motivated by criminality or terrorism, and could be carried out for financial or political gain. Anecdotal evidence suggests that the risk of kidnap increases after dark. The security environment in the north east has deteriorated since 2018 and there is a heightened risk of kidnap. Kidnaps in the north east have included humanitarian and private sector workers. There are also reports that Boko Haram and Islamic State West Africa (ISWA) are continuing to actively plan to kidnap foreigners. As well as in north-east Nigeria, extremist groups operate in some northern and middle belt states including Bauchi, Gombe, Kano, Kogi, Kaduna, Niger and Adamawa. If you’re working or travelling in these States then you should be aware of the risk of terrorist kidnapping.

Violent crime is common. There tends to be an increase in reported burglaries and robberies during the festive season. You should be particularly vigilant during this time.

Health authorities have classified Nigeria as having a risk of Zika virus transmission. 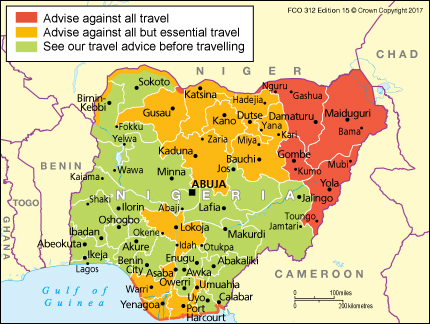