Ontario – Even without the benefit of context, the image of a naked 9-year-old girl running for her life is as searing and indelible today as it was 43 years ago. That image jolted people around the world. Some say it hastened the end of the Vietnam War. “I always remember that horrible day that we ran from life to death,” says Kim Phuc, the girl in that iconic photo. Now 52, she lives just outside Toronto, a wife, mother and survivor inextricably linked to a photograph that dominated front pages in 1972, seven months before the signing of Paris Peace Accords led to the withdrawal of U.S. combat forces from South Vietnam. In the beginning, says Phuc, she hated the photo. It embarrassed her. And she struggled with the publicity that surrounded it. For her. it was personal: It captured a moment of torment — her face frozen in an agonizing wail moments after a napalm attack burned and disfigured her for life. In fact, no one would blame Phuc if she had tried to get as far away from the image as possible. But that is not what she did.
After a long struggle, Phuc came to realize that if her pain and terror had not been captured on film that day, the bombing — like so many other wartime horrors — might have been lost to history. She began to think about what the photograph could give, rather than what it could take away. Eventually, the photo became much more than a depiction of a moment in time to Phuc — it became what she calls “a path to peace.” “I realized that if I couldn’t escape that picture, I wanted to go back to work with that picture for peace. And that is my choice.” ‘I can work with that picture for peace’ 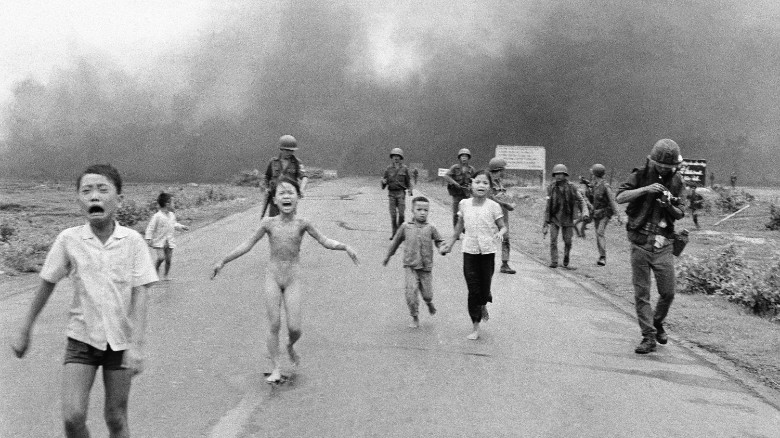 It’s hard to square the anguish and terror of the girl in the picture with the warm, relaxed, engaging presence that is Kim Phuc today.

Besides being a loving wife and mother, she is a mentor, and a goodwill ambassador for the United Nations. Every year she travels the world to recount her story of survival, to raise awareness about the brutality of war. In addition to her work with the U.N., Phuc started the Kim Foundation International, a charity that helps children suffering from war, just as she did so many years ago. Its mission is to help the most underprivileged children suffering from war — building hospitals, schools and homes for children who have been orphaned. Phuc says she plans to live out her life in service of that mission.

This entry was posted in News.
Back to top